The two-story brick building at the intersection of Trade and 5th Streets in Amity, Oregon, was built by the Masons in 1905. It is the oldest and still one of the largest commercial brick buildings in downtown Amity. A photograph taken when the building was ten years old shows a horse and buggy next to the south side of the building, on Fifth Street, with the name JW Briedwell painted prominently on the south wall. This was J. W. Briedwell, Jr., a prosperous businessman and vice president of the Bank of Amity. His father, J. W. Briedwell, Sr., came to Amity from Iowa in 1852, becoming one of its earliest settlers and a well-respected farmer and citizen. J. W. Briedwell, Jr., was probably the first owner of the building. Perhaps, like many prominent men of his era, he was a Mason and provided financial backing for the fraternity to build new quarters for their lodge. In early photographs, the square and compass insignia of the Masons is prominently displayed on the front of the building above the storefront, affirming that the upper floor of the building, where Amity Flats now exists, was used as a Masonic Lodge from the beginning. The ground floor was initially used as a mercantile or dry goods store. 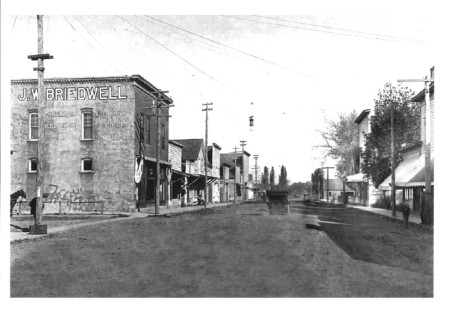 Many of the subsequent owners lived upstairs while they conducted business downstairs, and each added his or her own interesting and sometimes peculiar “stamp” to the space. When Rob Kistler and Barb Bond purchased the old building in 2013, there was a bathroom upstairs that was probably built in the 1960s, with a toilet set on a platform like a throne that looked out into an adjacent room through a window! Dozens of old blankets and pieces of cardboard were tacked to the ceiling to provide a bit of insulation. By 2013 the building was showing serious signs of age and disrepair. The beautiful, old-growth Douglas-fir flooring on the ground floor had rotted in some places and was sagging in others. Windows leaked and sweated and their frames were rotting. Some of the bricks were starting to crumble from moisture penetration. Such a shame! But it wasn’t too late to bring life and vitality back to 418 S. Trade Street.

Serious renovation efforts began in 2014 with design plans from E.R. Munch Architects of Portland, OR. They crafted a plan that maintains the authentic character of the space and at the same time enhances its safety (including earthquake upgrading), functionality and environmental sustainability. Because we honor and support our local community, we collaborated with skillful workers and craftspeople who live in Amity or nearby communities.

Ultra-high efficiency windows were custom-crafted to retain the authentic look of the 1905 originals, with a nod to European functionality. A state-of-the-art, high-efficiency HVAC system supported by a modern, high-capacity solar array reflect Rob and Barb’s dedication to sustainability. And to accommodate the varied needs of our modern guests, wheelchair-friendly facilities are available, and there is a high-security bicycle storage area downstairs.

To view a slide show of the three-year renovation process, click here